nand2tetris: a book review and recap

Nand2Tetris, or The Elements of Computing Systems, is a twelve-part course in fundamental computer engineering that steps you through the creation of a computer from the ground up, starting with NAND logic gates and ending with an operating system capable of running a complicated program like Tetris.

The course, architected by Noam Nisan and Shimon Schocken, is available as a book that you can download for free (though it appears that some chapters are only available in terse PowerPoint form), and emphasizes a hands-on approach that leads up to some pretty epic struggles and Aha! moments. I just recently finished the course after about two months of hacking on it in my free time – if you reliably spend a couple hours a day on it, though, I can easily see you finishing in two weeks – and wanted to share an overview of the content and some thoughts. 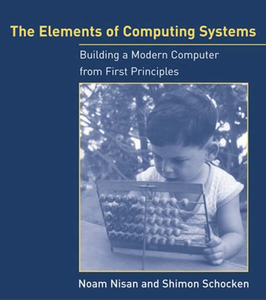 Once upon a time, every computer specialist had a gestalt understanding of how computers worked. The overall interactions among hardware, software, compilers, and the operating system were simple and transparent enough to produce a coherent picture of the computer’s operations. As modern computer technologies have become increasingly more complex, this clarity is all but lost: the most fundamental ideas and techniques in computer science—the very essence of the field—are now hidden under many layers of obscure interfaces and proprietary implementations. An inevitable consequence of this complexity has been specialization, leading to computer science curricula of many courses, each covering a single aspect of the field.
Elements of Computing Systems: Preface

Nand2Tetris consists of twelve lectures/chapters, each of which tackles a next logical step in building a computer called “Hack,” and iterates on all of your work up to that point. Note that the book ships with various supplementary materials (which you can download here), including emulators for various components of the computer, like the hardware, stack, and virtual machine. Here’s an overview the ground you’ll cover:

I’ll briefly summarize the contents of each chapter (partly as a review for myself).

We learn about boolean logic, or logic with boolean values – conveniently, 0s and 1s – that facilitate logical/mathematical operations in hardware. We then construct primitive logic gates, like AND, OR, and MUX, which operate on single-bit inputs, and chain those together to implement their multi-bit (in this case, the Hack word, or two bytes) counterparts, like AND16.

We cover binary addition and two’s complement, a means of representing signed numbers (in other words, negative and positive values instead of positive values only), and implement adder chips to perform addition at the hardware level. Finally, we devise an ALU (Arithmetic Logic Unit), which implements addition and value comparisons (ie, logic operations), but, unlike industrial-grade hardware, not either of multiplication and division. We’ll implement those operations at the software level – specifically, in the operating system’s math standard library – in the interest of simplicity, but at the expense of speed.

Throughout chapters 1 and 2 we implemented combinational chips using NAND gates, and got arithmetic/logic out of the way. This section introduces a new fundamental building block: the DFF, or Data Flip Flop, which will allow us to construct the second crucial component of our Hack computer – memory. Unlike combinational chips, which simply intake arguments via input pins and “immediately” spit out a result to output pins and are thus stateless, the sequential circuits that we’ll implement with flip-flops are capable of maintaining values across time. Note that, even though we treat the DFF as a fundamental chip, it can be implemented using NAND gates and more – Nand2Tetris just thoughtfully spares us that gory implementation. We implement a Bit, Register, and multiple RAM chips with iteratively larger capacities (64-word RAM consists of 8-word RAM, 512 of 64, etc.), and also a program counter, which we’ll use to keep track of the next CPU instruction to execute. This sequential business is a little mind-bending (and quite cool) because it effectively makes use of delayed recursion in a hardware context.

We’re introduced to the Hack machine language, or the format of the binary strings that our CPU (to be implemented in the next chapter) will interpret as instructions, and its correspondent assembly language: this is the interface between hardware and software. Assembly is a human-readable representation of machine code which allows instructions to be written with mnemonics like ADD or SUB; those are then compiled down to the appropriate binary by an assembler (to be implemented in chapter 6) – essentially a glorified preprocessor. Here’s an example of Hack assembly:

The above code adds all consecutive integers between 0 and some number, storing the sum in a variable sum.

We implement the Hack CPU, which abstracts away all hardware operations and exposes an API for executing them – that is, the machine language. The CPU integrates chapters 2 (the ALU) and 3 (RAM) in a classic mold of the von Neumann architecture: 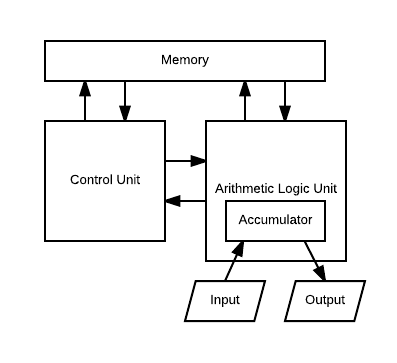 Assembly! Everyone loves assembly! This section extends chapter 4, which documented the Hack assembly language spec., and has you implement the assembler that translates such programs to binary machine instructions. 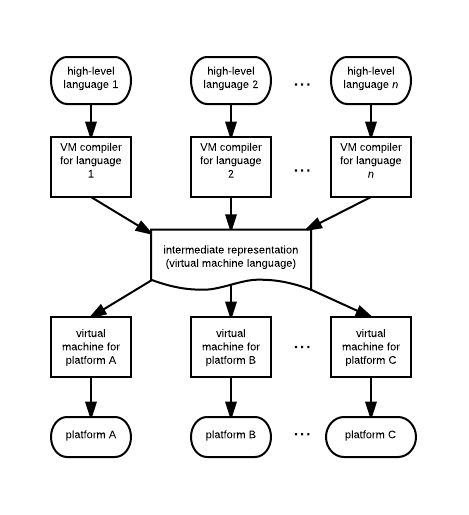 Anyway, the Hack virtual machine wraps its assembly language in a simple, stack-based interface. We implement the IR-to-assembly compiler, which becomes tricky once we involve things like stack frames. Sample code looks like:

We’re introduced to the spec for a high-level, object-oriented language (without garbage collection) not unlike Java, called Jack. The following Jack code defines a class Point, which represents a 2D geometric point:

Finally, we implement the Hack operating system (using Jack), which only consists of a number of standard system libraries that govern things like math, memory management, and graphics. The chapter centers heavily on algorithms, introducing some fascinating optimized approaches to problems including multiplication and heap allocation.

That was a pretty wild ride. I heard about The Elements of Computing Systems nearly two years ago and kept it on the back-burner ever since, and am very glad I finally got around to reading it. Nisan and Schocken succeeded tremendously in what they set out to accomplish – creating a course that gives you a universal, if shallow, understanding of the entire hardware and software stack that computers operate on.

The individual sections are clear and concise, with just enough technical and academic background, examples, and project walkthroughs, and benefit from a uniform structure. Each project assignment involves a good deal of steering, as the authors underscore the suggested (though probably always the way you’d want to go anyway) approach to implementing the next stage of the computer, but with nothing in the way of concrete implementations – this encourages the reader to wet their feet and, in true hacker fashion, build the thing on their own. The software package that ships with the course is entirely bug-free, and the emulators are both user-friendly and robust (these things are easy to take for granted…).

An enormous amount of thought was clearly invested in the structure of the course. The various components of the Hack system have perfectly coupled interrelationships, and your work up to any single point almost magically helps you bootstrap the next project with incredible ease – this is mostly true for the hardware sections of the course, where chip creation is a highly iterative process, and lets you create substantially complicated circuits out of nothing in no time.

Another nice bit about Nand2Tetris is that it has much to offer to people at various skill levels. I entered the course having never written a line of assembly, nor did I have much knowledge about compilers and virtual machines, but I did have a reasonable amount of software engineering experience and at least a vague understanding of the aforementioned components: the course ended up perfect, though I suspect that it’s mostly aimed at people in my situation. Still, I can see it being useful even to greybeards with a nuanced knowledge of architectures, compilers, and operating systems, simply because it does such a good job of tying them all together in a single coherent project. I can imagine myself giving it another pass a couple of years from now, taking each of the projects further and refreshing myself on the overview it provides.

Finally, the course is lightweight: the book comes in at just under 300 pages, and that’s with twelve sections that collectively cover all of the vital components of a rudimentary computer. As a result, it doesn’t delve terribly far into any one of them; you won’t implement many elementary chips, the authors intentionally skip over involved problems like hardware multiplication, the computer won’t have a filesystem, you won’t come anywhere near hardware acceleration, networking isn’t covered, and the high-level language you develop is highly limited (both in syntax and functionality). That’s the point. The Elements of Computing Systems tries to provide a general introduction to each component and a coherent project that ties them all together – it’s not the place to go for an immersive foray into any of them. On the upside, it underscore a wealth of questions which you’re then encouraged to explore on your own.

Taking some notes (I did) for future reference might be a good idea while you read.

N2T is, in my opinion, a high quality must-read for software engineers. Can’t recommend it enough.

a note on requisites

This course is not for the amateur programmer. While the hardware chapters, the projects for which primarily consist of implementing chips using an HDL, or hardware description language, don’t require any prior experience with anything, the software sections involve the creation of reasonably complicated software in your programming language of choice. A solid grasp of recursion is necessary for parsing, tokenization would probably be hell without a knowledge of regex, and the compilers require some engineering acumen to implement cleanly – plus, it might be nice to have a vague understanding of all the various components of a computer’s hardware and software going into the course, so that it clarifies and refines your understanding of the various moving parts instead of simply introducing a bunch of theretofore unheard-of concepts that, as a result, might be difficult to appreciate. I hope someone proves me wrong, though!

As a complete aside, you’ll work with a number of ad-hoc languages throughout the course: HDL, Hack assembly, Hack virtual machine language, and Jack. I’m a Vim user and got a little tired of the lack of syntax highlighting, so wrote up a minimalist plugin to provide it.